Earthquake of a Storm

What a peaceful sleep it must have been. 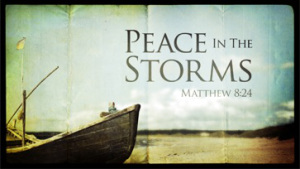 As He slept in the boat, Mark 4:38 tells us that He awoke to His disciples saying to Him, “Teacher, do You not care that we are perishing?”

Jesus gets up from His slumber and simply says, “Hush, be still.” This earthquake of a storm stops and the Scriptures tell us that it became “perfectly calm.”  He turns to His disciples in the midst of peace and says, “Why are you afraid?  Do you still have no faith?”

Can you imagine that moment?  Can you imagine the disciples looking around and realizing in a split second the chaos around them became peace!  The earthquake stopped with no aftershocks!  They went from being afraid of the storm to being afraid of the One who calmed the storm.  Mark 4:41 says, “They became very much afraid and said to one another, 'Who then is this, that even the wind and the sea obey Him?'”

I can’t help but think how often we believe we find ourselves in an “earthquake of a storm” only to forget it is nothing that God can’t handle.  We are so apt to make the storms bigger than they are--or more likely, we make God smaller than He truly is.

Never forget, man may view the storms of this life as chaos.  God views them simply as something to sleep through. Jesus says in John 14:27, “Peace I leave with you; My peace I give to you; not as the world gives do I give to you. Do not let your heart be troubled, nor let it be fearful.”

It has become evident that many Christians struggle with understanding God’s power.  We get so consumed with what is going on around us that we forget that Jesus in essence is asleep in the boat with us.  I have heard Christians, including those in leadership in churches, sound the alarm about the storms going on around us.  I can only imagine God looking at us and saying, “Why are you afraid? Do you still have no faith?”

The disciples saw Jesus do many miracles up to this point in Matthew 8, but His power over nature caused them to be afraid due to His power.  Too often we may find ourselves thinking that whatever we are going through is too big of a problem for God to handle.  Perhaps the real problem is that we truly don’t understand who He is.

Paul tells us in Philippians 4:7, “And the peace of God, which surpasses all comprehension, will guard your hearts and your minds in Christ Jesus.” The question for us to ponder is, “Can we find peace even in the midst of an earthquake of a storm?”